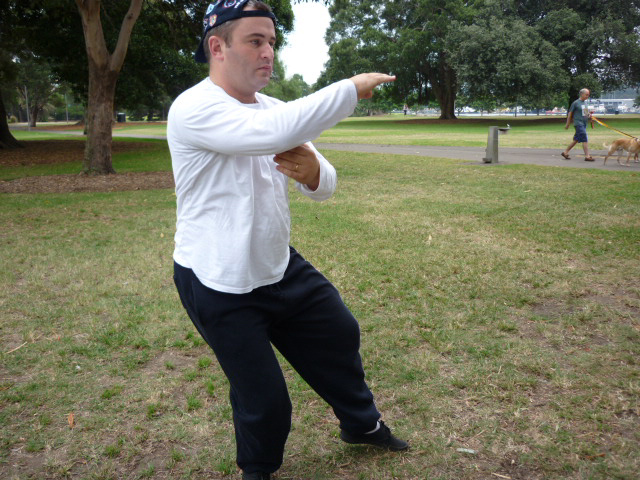 On 5/05/2015 10:23 PM, Ray Hampton wrote:
Healing through Tai Chi
On my journey of Yuan Chi Tai Chi I have discovered internal therapeutic benefits in our style.
Whether it be push hands, our Dance, CMC or sword forms.
‘It’ starts with a connection that activates from within and becomes an undulating ebb of nurturing, healing, connecting flow that emanates from within and flows outwards as far as we are able to let it go or surrender. This energy is the all pervading power that physically flows through us and resides in us all.
Under the instruction and teaching of Master Ric Lum I have experienced the physical benefits and health benefits of this all pervading power or Chi energy. It works from within and is the true connection and meaning of the Chinese term ‘Tai Chi’.
I strongly recommend a class with Master Ric Lum to gain this experience.
sincerely
Ray Hampton

Tai Chi develops the subtlety of character.
Tai Chi and the meaning of its moves and depth of connection reveal themselves as person becomes more subtle.
I have seen “grasp birds tail” in other martial arts performed by evil people, I mean evil in the sense that there is no sense of kindness or ability to have discretion of when it is appropriate and not appropriate to use or teach this knowledge. Such techniques of potential lethal use should not be taught to whomever wishes to learn them. UFC is the ultimate expression of gross physical.
In Yuan-Chi Tai Chi Chuan, in our school, the meaning and variables of each move reveals itself as a person becomes more subtle, gentle, understanding and compassionate, i.e. they experience the genuine all pervading Chi and change internally and externally as a result. Reveals as a person becomes worthy. Genuine Tai Chi develops the subtlety of character.
Ray

I am a Sahaja Yogi who took up Yuan-Chi Tai Chi Chuan 3.1/2 years ago. To me it made sense to do exercise that would complement what I have been doing in Meditation for some years now. Prior I was doing a lot of running and Judo and many other martial arts. These clearly were not the way and I experienced great frustration having done Judo since I was six and knowing that what we have inherited is not the gentle soft way that Judo was originally supposed to be.

There are two levels at my stage of progress that I wish to comment on:

1 The physical/Gross aspect:
Core strength and flexibility have greatly improved and injuries for which I took treatment often no longer require that treatment.

The biggest blockage physically that I have always experienced is tension. This is now peeling away layer by layer. As part of the process I am becoming more aware of that tension and therefore more needful to be rid of it. However the step by step approach is the essential one as trying to achieve the goals prior to readiness will only create more tension. Physically I have noted other subtle changes such as once upon a time always feeling hot. This heat has now gone to the point where I now overcompensate to dress warmly. I have also become aware of the extensor muscles at the back of the neck continuously in a state of overwork and the head being at a point of unbalance thereby irritating this situation. Awareness is the biggest step to fixing the problem.

Whilst I do not go out of my way to stretch there is more flexibility. With each new step physically I discover more movement internally and externally.
Weight wise I have become more aware of what I am ingesting and aware that the losing of weight is about sensitivity/awareness of what we consume, not the unsustainable damaging exercise that we must keep up in order to keep poor health and weight at bay.
Each time we go through “the Dance” new aspects reveal themselves and each time is different both on the subtle and gross physical levels.
I have become aware of the “Flow”, and that this “flow” has its own time and speed that is like a groove that you fall into and the movement moves by itself.

2 The Subtle/internal aspects:
As a Sahaja Yogi I am already aware of the connections that we have to the Param.Chaitanya. What I have experienced internally is the benefits of the physical moving in conjunction with this internal knowledge thereby helping me from inside and out. “Meditation as movement in stillness and stillness within movement” the two are one and the same: being meditative in stillness as well as in moving .

Throughout these past few years of practising Yuan-Chi Tai-Chi the subtleties of the internal and external have been revealing themselves in each new step. One particular experience is that of the power of Mother Earth actually coming up through the entire being and actually making a real connection with the Earth as opposed to an unrealised superficial connection of standing on the earth.

Another one was the experience of the Adi Guru area of the void actually physically rippling as the Kundalini came rushing up. This had me ruminating that the actual origins (like many things) of the belly dance may have actually been auspicious as opposed to its common modern portrayal.

One thing is certain. Everything is in constant change of improvement. I am not sure where this will go but I am enjoying the journey of discovery that I suspect does not end but results in a better version of me than the one the moment before.
Lets see….

I started Tai-Chi with Ric Lum one year ago. After doing Judo for 33 years and a variety of other sports including long distance running I found that physically nothing was improving with regards to flexibility and old injuries. I started looking for something that would complement Sahaja Yoga, the vibrations and spiritual growth but from the physical side. I knew nothing like this existed but did try to find it in the gentle way of Judo. The club I was at had practitioners regularly suffering from injuries that seemed second only to that sustained in car crashes.
A Sahaja Yogi suggested I try this form of Tai-Chi he was studying with Ric Lum. I went along to a session with all the reservations that a yogi would have with regards to something which may not be categorized as pure knowledge. Ric asked us to only judge on our vibrations what he said and taught. As we started to move I felt the vibrations flow.My personal feeling is that Ric has found a way of plugging this form of Tai-Chi back into the main frame – The Paramachaitanya-.

One of the most profound experiences was that of experiencing becoming aware of moving the feet very lightly and gently on the living, loving, supporting Mother Earth.
I am enjoying this form of exercise not only because it is much more than that but also found meditations more surrendered as some of the physical blockages are opening.

Our youngest daughter at ISPS had suffered from debilitating knee pains since the age of two and were not abating at 10 years of age (to the point of not sleeping due to the agony) No doctors could fix it and one podiatrist/orthotics specialist wanted $500 for an insert which she would need for the rest of her life without any cure possible for what she perceived the problem to be.
Last ISPS holidays we took her to Tai Chi classes with Ric and the problem was fixed within 2 months.